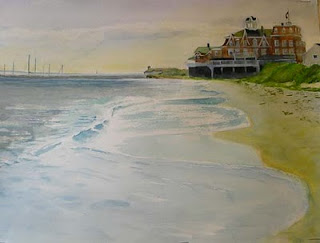 As I sat on the Block Island Ferry this past Friday I glanced at the front page of the Block Island times, the Valentine’s edition, and at the bottom of the front page a short article caught my eye, “Surf Hotel back on the Market.” The article announces that the potential buyers of the iconic hotel are unable to obtain financing. The group still remains very interested in the historic hotel and many others have expressed interest since the hotel has returned to the market. The hotel is owned and was operated by the Cyr family for over 50 years. Not only is the hotel back on the market, but so are the memories, myths and stories that go along with it. One story about the hotel stands out in my mind; a ghost story about two who met working at the hotel.

The summer of 1908 was a hot one on Block Island. Rose, a beautiful 19 year old from Westport Connecticut, d 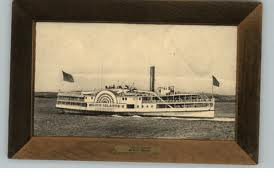 ecided to come to the island and work for the summer like many young people do to save money for her education; Rose wanted nothing more than to become a teacher. She arrived on a Thursday afternoon where she was met at the boat by John, the hotel owner's son. He was a tall young man wearing a cap, shorts, and a white cotton button up top. He greeted her with a polite hand shake and said “How do you do miss, welcome to Block Island.” His handsome looks caught Rose's eye. They took the short walk up the hill to the hotel, John carrying her bags. He showed her to her quarters and then it was off to work for the both of them. 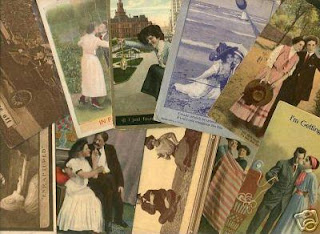 Rose was a chamber maid and checked guests into their rooms; John maintained the hotel's grounds and often took to the sea early in the morning to catch fish for dinner for the guests. Rose and John crossed paths several times a day and within a few days became very friendly. The two began spending a great deal of time together. Early morning walks on the beach holding hands, splashing in the cold ocean leading to hysteric laughter, late night stargazing rocking away in the rocking chairs overlooking the ocean on the famous Surf Hotel porch, and secret romantic picnic lunches sharing heart felt kisses soon lead to love and it was pure and beautiful.
The two fell deeply in love that summer and Rose decided that she was not going to leave. The two got married the following year and continued working at the hotel and eventually took over operations and ownership from John's parents. They ran the hotel together for 30 years. 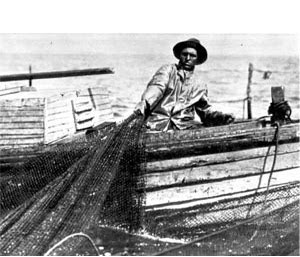 Every morning John would take off and head out on the Block Island Sound and fish for Stripers and Blues which Rose would cook up in the evenings for the guests. When John would leave in the morning Rose would patiently wait on the porch of the Surf Hotel in one of the rocking chairs waiting and watching for John’s boat to come in. Everyday she would calmly rock back and forth in her rocking chair. As soon as she would see his boat at the 1 mile marker she would go back inside and wait for him to bring the catch up to the kitchen and she would then start preparing the dinner for that night. Rose was the best seafood cook on Block Island.

Early one Saturday morning, Rose and John woke up to watch a beautiful sunrise full of brilliant reds and oranges. They enjoyed the sunrise for a moment then John was off to catch that night’s dinner. He kissed Rose on the forehead and told her, “A hundred hearts would be too few to carry all my love for you.” He promised that he would be back shortly and off he went.


That morning Rose had a strange feeling that something was off but continued on with her routine. She went to the kitchen, made herself a cup of tea and some breakfast, and headed out to her rocking chair to wait for her love to come back from sea. As she sat rocking, she was reminded of a familiar saying, “Red sky in the morning sailors take warning, red sky at night sailor’s delight”. That morning the sky was full of red. Her heart sank. The only thing she could think of was John's safety.
As Rose ate her breakfast the sky became dark, the rain began to come down heavy and the infamous Block Island North East wind began to blow. Rose pushed her rocking chair out of the rain under the roofs over hang and continued to rock calmly repeating the saying, “Red sky in the morning sailors take warning”. Rose waited and waited, but her true love never returned. Unbeknown to her, John’s boat had taken on water and slowly sunk down to the bottom of the ocean off Pots and Kettles. John went down with his boat and was never seen again. 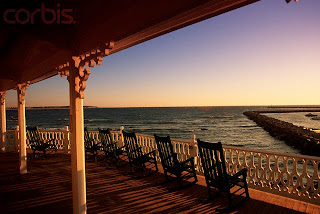 Rose never tried to find love again because she truly believed that “Some love lasts a life time, true love lasts forever”. She felt John was her only true love and nothing could compare to the love the two of them shared. Rose died at the age of 76 in her sleep; they say she suffered from a broken heart every day until the day of her passing. Rose would go out to the front porch of the hotel and rock calmly in her rocking chair and wait for her husband to return from sea. She never gave up the hope of seeing her true love again.


After John's passing, Rose did not want to continue to run the hotel. It closed for 17 years, and in 1956 the 35 room Victorian hotel was sold. After the sale of the hotel visitors would report seeing the rocking chair moving on the front porch with no one in it and not a hint of wind. When visitors ask about why that rocking chair rocks by itself, the hotel workers tell this story and or simply explain it is Rose waiting for the love of her life to return from sea.
cute story, but creepy


I LOVE the ghost stories based on the sea!


The most beautiful ghost story I've ever heard


Love this story heartfelt, and how horrible is the feeling of someone you love so much never returns. But in your heart they are always there.

Stay connected with the latest from Lila Delman Real Estate!